London, UK / February 09, 2022 / SEAPRWIRE / FLAG Network, a decentralized protocol, and ecosystem designed specifically for building and connecting Ethereum-compatible blockchain systems, has announced the launch of its project. Created by a team of decentralized developers, FLAG Network assembles a plethora of solutions on the Ethereum network, thus supporting a multiple chain ecosystem.

As a protocol in the ever-evolving crypto space, FLAG Network was designed to address some of the difficulties associated with blockchain usage and adoption—high gas fees, the outrageous cost of running apps, and slow throughput. Albeit similar to other solutions like Polkadot, Cosmos, Avalanche, et al, FLAG Network, according to the development team, is advantageous in three pertinent yet often overlooked areas; simplifies the usage of Ethereum’s network effects, provides a safer environment, and opens up a more stable and powerful world to users.

The premier DApp blockchain, Ethereum paved the way for the proliferation of a ton of nascent crypto trends by playing host to them. FLAG Network has chosen this revolutionary yet problem-plagued network which, at the time of writing, is laden with major and minor imperfections, some of which include—oor UX, low throughput, high cost, and non-sovereignty.

Aimed at building and connecting Ethereum-compatible networks, FLAG Network will enable users to perform a ton of activities on the network;

Created by developers for developers, FLAG Network, in addition to the offerings mentioned, will deliver scalability through the integration of remarkably scalable consensus algorithms, ETH compatibility, sovereignty, interoperability, and other impressive features currently absent from the Ethereum blockchain.

Furthermore, FLAG Network has launched a native token that will not only drive this project but will offer holders sizable rewards for staking. 90% of the total revenue generated by this project will be shared amongst all token holders, although based on the total amount of tokens staked. Receiving fees in a variety of cryptocurrencies, FLAG holders are in a way owning a passive income portfolio of several cryptocurrencies. 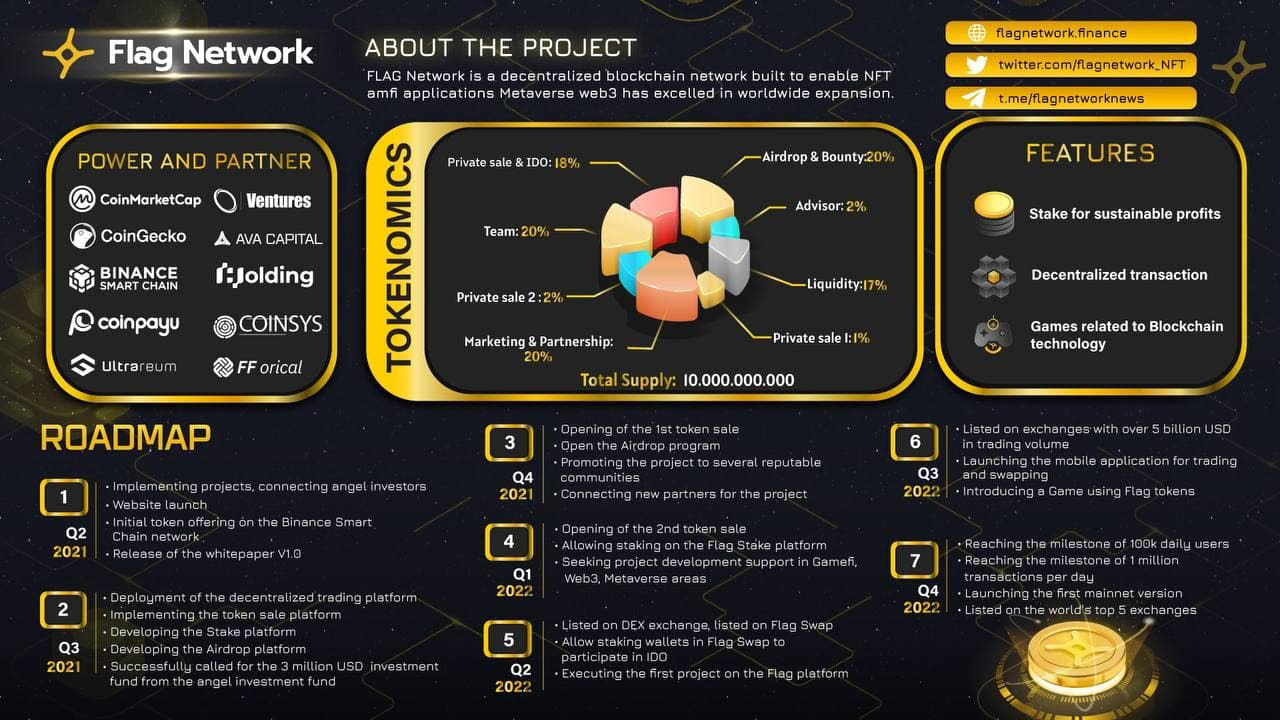 With a feasible and comprehensible roadmap, FLAG Network is set to achieve a ton of things before the end of the year. Listed on Flag Swap and other centralized exchanges with billions of dollars in trading volume, FLAG Network will launch an NFT collection and in Q4 of 2022, it will list on the world’s top 5 exchanges while launching its mainnet on the Binance Smart Chain.